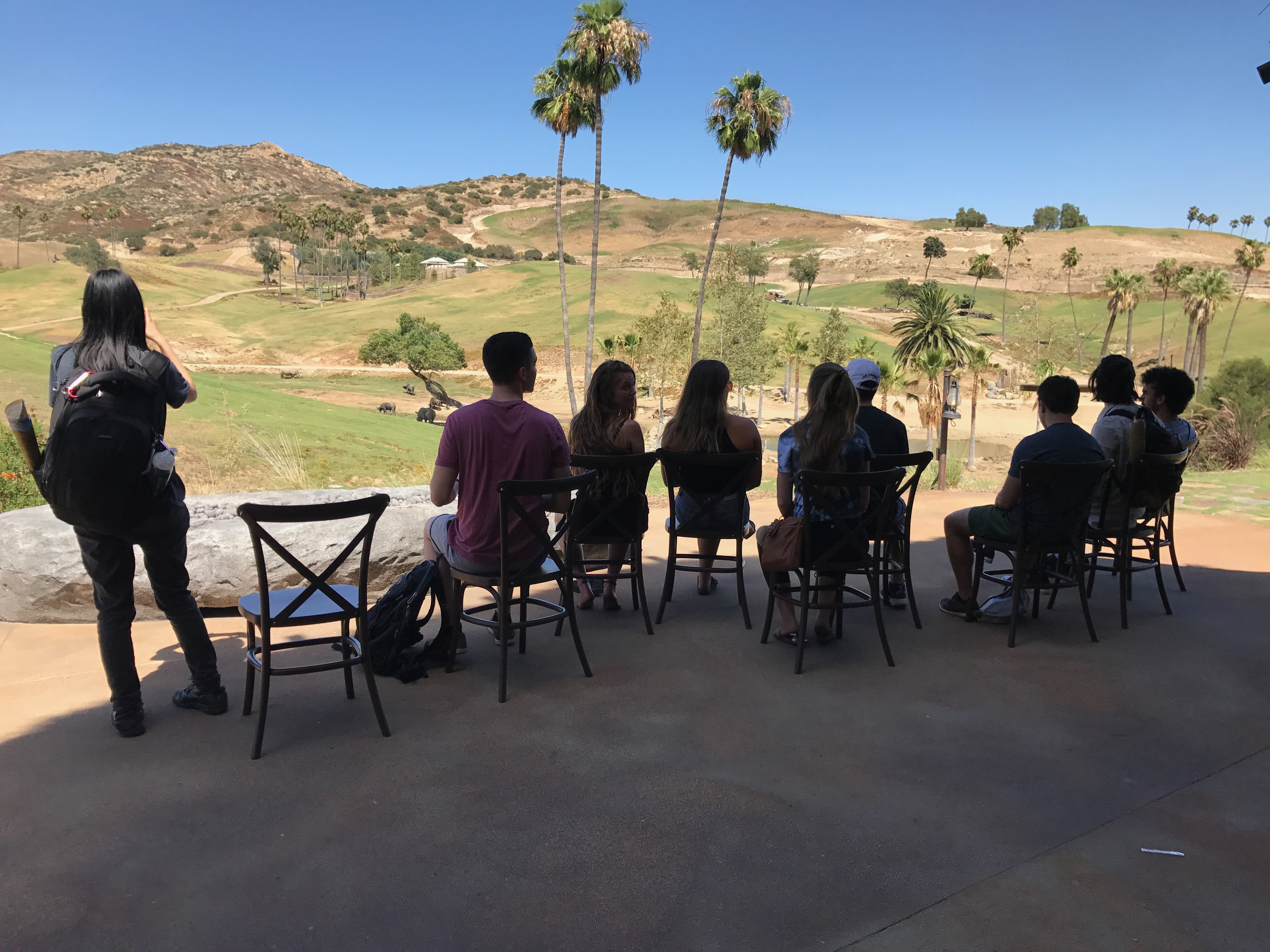 This summer, we are hosting 11Â students from around the USA as part of our 2017 summer REU program. Â Our students are working on a number of projects, including developing SLAM algorithms for archaeology missions, developing machine learning for species detection and classification, improving the radio telemetry tracker, and developing light-weight flight platforms.

Meet our 2017 REU researchers by reading their bios below! Anthony is a rising senior at UC Santa Cruz, where he is pursuing his bachelors degree in Computer Engineering with a Computer Systems concentration. Previously, he has enjoyed applying programming and development methodologies to low-level and embedded projects, drawing from FOSS and OSH wherever possible. Anthony is spending his summer with E4E exploring Digital Signal Processing techniques for low energy signals to improve the reliability and flexibility of the Radio Collar Tracker project. He hopes to deliver a scalable and easy to use system, adaptable to different wildlife tracking applications. Outside of his tech-life, Anthony loves reading, listening to music, hiking, swimming, playing old video games, and rock climbing. Leif is a senior at Princeton University studying Electrical Engineering with a concentration in Computer Systems. He is going to spend the summer retooling the animal tracking radio payload for a smaller fixed wing aircraft, enabling easier field deployment. In his spare time, Leif enjoys cooking, weightlifting, and long unmanned flights on the beach. Waseem is a senior at Rutgers University studying Physics with an interest in Computer Vision. This summer, he is interested in working on assessing the accuracy of SLAM-generated models of the Maya Archeology Project by comparing to point clouds collected by LiDAR. In his spare time, Waseem enjoys playing basketball, hiking, and playing video games. Julien is a senior at UC Berkeley completing a double major in Physics and Cognitive Science, with an emphasis in computational modeling. He has done research for electrical engineering, fluid mechanics, and neural engineering labs. This summer he will be setting up a computer vision architecture for tracking changes in mangrove land-cover. Julien enjoys skiing, Brazilian jiu-jitsu, meditating and reading books. Samantha is a soon to be senior Computer Science major at Wheeling Jesuit University with minors in Math and Spanish as well as a college soccer player. She plans to spend the summer working on machine learning for analyzing coral reefs and mangroves. She is a lover of guac, chameleons, and traveling. In her free time she can be found doing yoga, taking pictures, attempting to surf, or exploring. Katlin is a senior at Portland State University studying electrical engineering. She has a strong interest in analog and RF technologies. This summer she is planning to work on the Radio Collar project to increase the efficiency of the antenna by experimenting with different antenna form factors; including folded dipole and PCB designed antenna. In her free time she loves to meditate, read, play sports and look at/smell/ and feel all the flowers and plants around. Lysny is a junior at the University of Florida studying Electrical Engineering. She is also involved in the synchronized swimming program at UF and previously worked in the Machine Learning & Sensing lab. She wants to spend the summer working with computer vision for mangrove species detection and classification. Lysny loves avocados, football season and Jolyn swimwear. Nicholas is a senior at UC San Diego studying Computer Engineering with an interest in systems engineering, computer vision, and entrepreneurship. Over the summer he plans to work on a coral reef exploration robot, in addition to a mangrove classification system that will be used to improve mangrove management and protection. He plans to develop a machine learning pipeline for mapping species density from high resolution drone imagery. This mapping will be translated as ground truth data to help train our primary machine learning pipeline, which will be consuming daily satellite imagery. He previously worked on the Maya Project in 2017 developing a backpack and light system used for 3D mapping ruins in Guatemala, as well as the control systems for a remote controlled boat used to explore water filled caves in the Mojave desert on an Explorers Club expedition. In his spare time, Nicholas enjoys developing his business, wake boarding, and climbing. Felix Parker is a sophomore at Johns Hopkins University studying Computer Science and Applied Mathematics. He is primarily interested in computer vision and machine learning. This summer he will be working on a system to classify mangrove and coral species from aerial and underwater imagery. In his free time Felix enjoys climbing, running, hiking, and reading. Brynn is a rising senior at UC San Diego studying Mechanical Engineering. During the school year, she does research in a shock and impacts lab studying the shock wave dynamics of cavitation bubbles. This summer Brynn is interested in working with computer vision and machine learning for mangrove species detection and classification. She will also be working to waterproof a camera to be used in the coral reef project, and create a camera mount for the multi-spectral camera used in the mangrove project. In her free time, Brynn enjoys hiking, painting, and playing volleyball. Proud is a senior at UC San Diego studying Math-Computer Science. This summer she is working on the Mayan Archeology project, converting video and sensor data from Mayan temples into 3D computer models using Simultaneous Localization and Mapping (SLAM). She aims to improve the post-processing of this data to generate more accurate 3D point clouds. In her free time, she also enjoys learning, teaching, learning how to learn and teach, cooking, making and consuming puns, and learning about robotics. Zandria is a senior at the University of the Virgin Islands where she is studying Computer Science. Â She has previous experience at the Scripps Institute of Oceanography in ecosystem system-based strategies for optimizing natural treatment of stormwater in Southern California. Â This summer, she is working with Dr. Maya deVries, and she looks forward to optimizing camera course recognition for a soft robot that will be used for coral reef exploration. Â Outside of academia, she enjoys hiking, comic books, and watching cinematic films. Nathan Hui is an Electrical Engineering Masters student at UC San Diego. He completed his undergrad at UC San Diego, in Electrical Engineering. He is currently the Project Lead for the Radio Collar Tracker, a collaboration between UC San Diego and the San Diego Zoo. Hui has been a member of Engineers for Exploration since 2014, working on projects including the Aerial Balloon Platform. In addition to being a student and undergraduate researcher, Hui is a Wilderness Guide with UC San Diegoâ€™s Outback Adventures, guiding students on trips throughout the Southwestern United States and Western Mexico. Eric is a research and development engineer at UC San Diego, with an interest in robotics and imaging systems. Â As an undergraduate, he led E4E’s aerial projects team to deploy both locally and internationally. Â This summer, he served as a mentor for the machine learning project. Â When not sitting in front of a computer, Eric enjoys hiking and climbing. Quentin is a PhD student in Computer Science at UC San Diego. He moved from France to the US in 2010 and worked for 2 years in GPU technologies for radiation therapy treatment. He started his PhD in 2013 with Prof. Ryan Kastner, working on 3D scanning algorithms and hardware acceleration for embedded systems. Quentin joined Engineers for Exploration in 2014 and recently applied his work in an archaeological site in Guatemala. When heâ€™s not too busy with his PhD work, he enjoys hiking, reading, photographing, film making and playing video games.