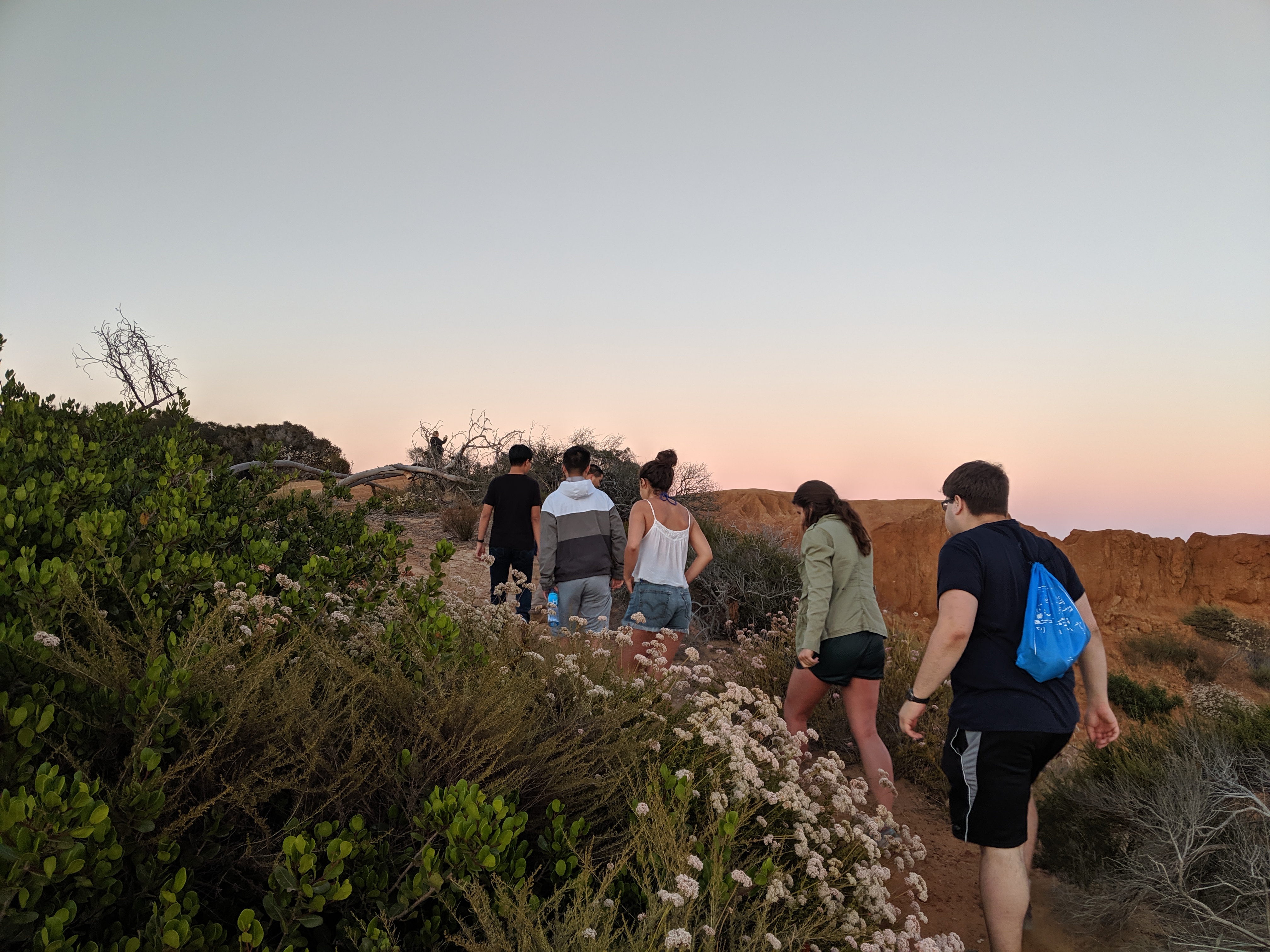 This summer, we are hosting 13 students from around the US in our 2019 summer REU program. We’ll be working on projects from mapping tunnels, corals, and mangrove to tracking animals with drones. Meet our students by reading their bios below: Christianna Bambini is a rising senior at Johns Hopkins University studying mechanical engineering. She is excited to apply her background in mechanical design for the mangrove mapping project this summer, where she will be prototyping, testing, and modifying equipment for more efficient and accurate on-ground data collection during expeditions. In her free time, she enjoys hiking, mountain biking, painting, and reading. Charmaine Beluso is a rising junior at Mississippi State University majoring in Computer Engineering and pursuing minors in Mathematics and Cognitive Science. This summer she is using CVAT to help scientists identify and annotate baboons from drone footage for the Baboon Project. She is also involved in the Coral Reef “D-SEA” Project where she is helping to create a device with an underwater depth sensor and display for 3D coral reef mapping. Outside of school, she enjoys playing guitar and piano, amateur photography, traveling, and anything outdoors. Allison Busa is a rising junior at the Olin College of Engineering, majoring in Electrical and Computer Engineering. Previously, she has worked on a range of different projects such as detecting Red-Winged Blackbird songs, making laser-tag playing robots and visualizing near-Earth asteroids. This summer, she is hoping to work on calculating biomass of mangrove species. In her free time, Alli likes foraging, running, spoon carving and beekeeping. Sam Ehrenstein is a rising junior at Case Western Reserve University double-majoring in Physics and Computer Science. This summer, he is using machine learning to identify and classify mangrove tree species, as well as refining algorithms for tracking baboons using drone footage. Previously, he has worked for the High-Energy Astrophysics group at Case simulating ultra-high-energy cosmic rays, as well as for the University of Maryland Electron Ring group. In his free time, Sam enjoys hiking, biking, fencing, playing Assassin’s Creed, and sleeping. Hassan Eid is a rising third-year at UC San Diego, majoring in Electrical Engineering. This summer he is working on the Maya Archaeology project which is helping to provide more efficient and accessible methods for archaeologists to map and document the environment they are studying. Hassan will help develop a robust platform for 3D mapping and test the various algorithms that are used in the process. Alongside engineering, he enjoys watching movies and sports, as well as hanging out at the beach. Emmanuel Gharehbekloo is a rising junior at University of California San Diego, studying Mechanical Engineering. He has been working on the radio telemetry project designing enclosures for the electronics of the drone using SolidWorks. The designs are tested by using 3D printing and he is part of the 2019 operations to track boas in the Turks and Caicos Islands. He previously helped design a rover that would carry a large payload through rough terrain. He has also filled in the engineering managers role for a coding team, writing a modular code to control the rover and a robotic arm. His hobbies include driving through the Angeles Crest highway for no reason and contemplating going to the beach. His prized possession is an ABBA vinyl he got from goodwill for a dollar. Natasha Hellebrandt is a rising junior at UC Berkeley, where she is studying Data Science. Natasha enjoys learning about various social justice issues and in her spare time volunteers at Sacred Heart Community Service in San Jose. She is passionate about conservation efforts and looks back fondly on her internship with Forest Fund Co., a Brazilian startup devoted to conservation in the Amazon Rainforest Biome, where she contributed to a riverbank reforestation project. This summer, she hopes to contribute to the Mangrove Monitoring project.

Charles Kinzel is an undergraduate senior with a major in computer engineering at CSU San Bernardino where he lives with his wife and four children. He is heavily involved in his church, The Salvation Army as a bus driver, a member of SATERN (Salvation Army Team Emergency Radio Network), Emergency Disaster Services, and general community outreach. Charles’ hobbies are woodworking and reading, lots of reading.

Arden Ma is a rising junior at UC San Diego, majoring in Electrical Engineering with a focus on Machine Learning and Controls. This summer, he is focusing on utilizing and evaluating machine learning techniques such as convolutional neural networks to improve upon current methods for mangrove species classification. Outside of the lab, Arden is actively involved in the engineering community as an officer at the IEEE Student Branch at UC San Diego, and in his free time, he enjoys surfing, programming, and searching for the best eats in San Diego. Anh Ngo is a rising junior at UC San Diego, majoring in Computer Science. He is interested in outdoor UAVs and autonomous vehicles, but spends way too much time indoors finding completely unnecessary tricks and configurations to optimize his workflow. He is spending his summer at E4E working on an algorithm to analyze drone footage to track moving objects in order to aid animal scientists in detect and track baboons in Kenya as well as investigating Visual Inertial Odometry (VIO) algorithms to allow archaeologists to cheaply and accurately create a 3D model of the Maya tunnels. In his free time, Anh likes to read while sipping Soylent, crash and rebuild quadcopters on weekends, and dream about becoming a prolific researcher someday. Eamon Patamasing is a rising junior at UC San Diego studying Electrical Engineering. Previously, he helped develop the electrical systems and processed hydrophone data for an autonomous underwater vehicle used for climate research. In collaboration with the Scripps Institution of Oceanography, he worked on image processing to analyze patterns in underwater activity of fish species along the California coast. His hobbies include eating cans of beans, forgetting his keys, and making macaroni and cheese. Enosh Reeder is a rising senior at the California Polytechnic State University in San Luis Obispo studying Aerospace Engineering with a concentration in Aeronautics. This summer he is working with the Scripps Institute of Oceanography at the Bioinspired Robotics and Design Lab with Dr. Mike Tolley to develop control mechanisms and increase the functionality of an underwater eversion soft robot designed to explore and map coral reefs. Some of his interests include woodworking, surfing, violin, reading, 3D printing, building computers, and other outdoor activities and sports. Eric is a rising sophomore majoring in computer engineering at UC San Diego. This summer he is working on the Radio Telemetry Tracker project, and will be flying out to the Turks and Caicos Islands to conduct field work. Eric will be tracking transmitter-attached boas with Emmanuel and the San Diego Zoo, and collecting data to essentially map the boas on a 2D map for the scientists to view and conduct their research with. Outside of academia, Eric loves playing violin, playing basketball, swimming, hiking, cycling, and hanging out with friends. Giovanni Vindiola is Junior Transfer Student at UCSD majoring in Computer Science, and is a member of Triton XR. This summer Giovanni will be sent to El Zotz archaeological site near Flores, Guatemala to help assist Quentin Gautier in Tunnel Mapping, LIDAR scanning, and Structure-From-Motion of active excavations. Using his experience in Creating Virtual Environments, he will be working on integrating the data collected in field to help create a VR experience to potentially be used at Museum exhibits in Guatemala City. Outside of academia he enjoys live music, playing guitar, modding video games, and strength training. Alex Xu is a rising junior at UC San Diego, majoring in Electrical Engineering and minoring in Mathematics. His previous hands-on experience includes Smart IoT Lamp project at Project in a Box and IEEE Micromouse competition. This summer, he is (most likely) developing an underwater depth sensor system for SIO researchers to use in creating 3D models of coral reefs. He came to the U.S. two years ago from Japan and in his free time, he enjoys reading books, playing table tennis and tennis, and going to the gym.